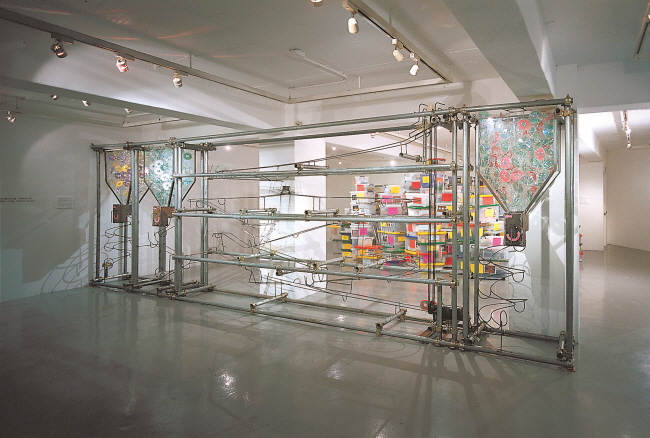 Art Works Vending Machine takes the form of a vending machine that sells the artist’s portfolio and video art that is packaged, ready for consumption. The audience can sample the works in two video rooms by watching preview videos before they make purchase: this is the artistic equivalent of a test drive. 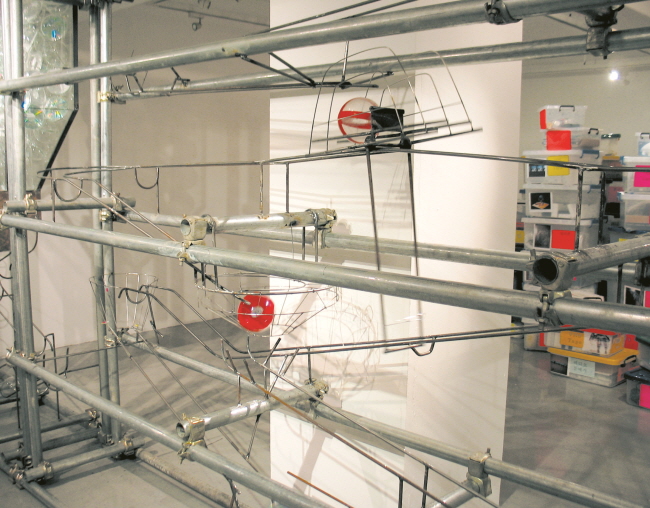 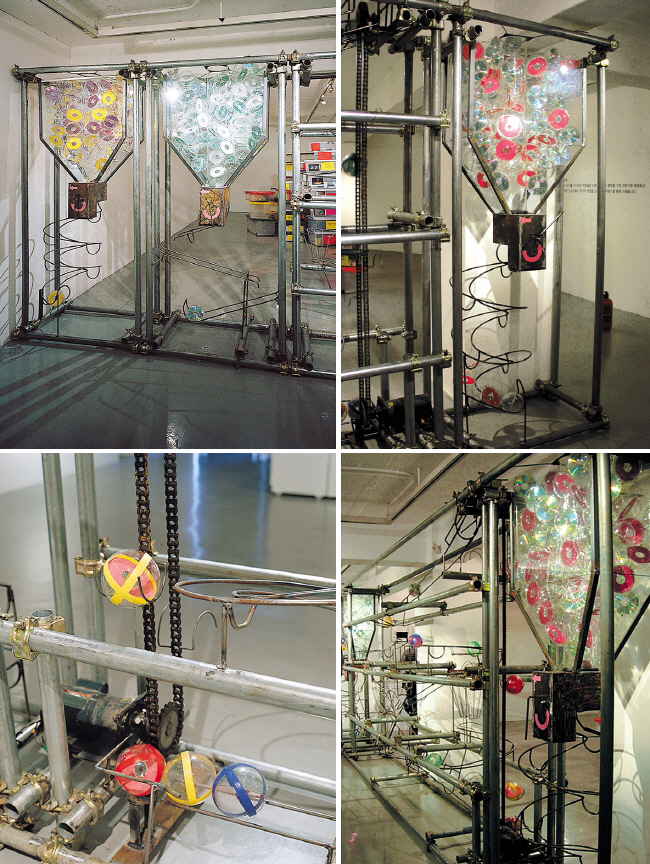 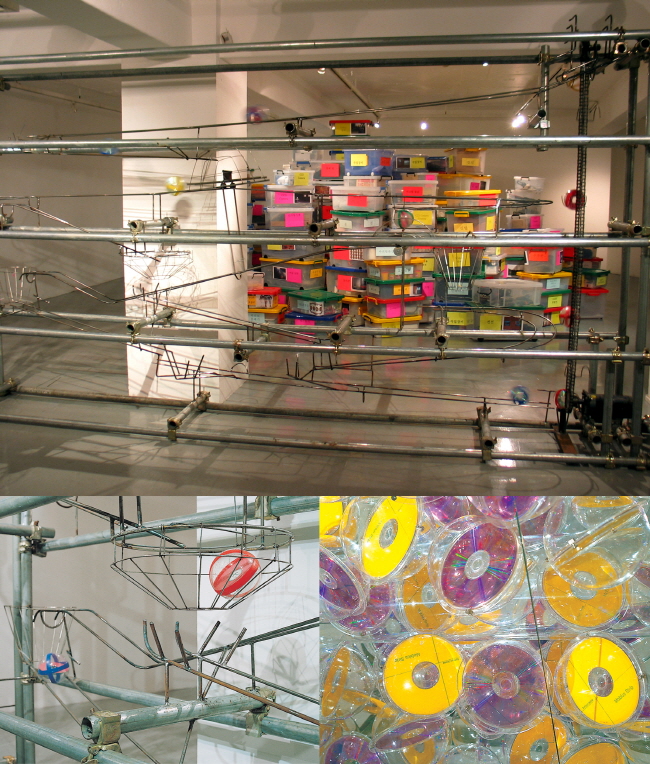 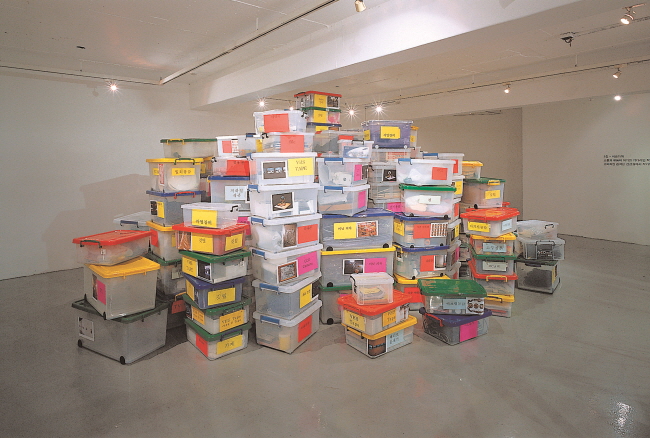 Warehouse is an archive that consists of many storage boxes, in which disassembled parts of her works are contained. It also adopts the processes of a warehouse, where sales items are waiting to be moved on a conveyer belt to the vending machine. Differently colored labels are attached on each box showing the title of the art works, the exhibition in which the work was presented, plus the images documenting the work, as it was, when it was installed. 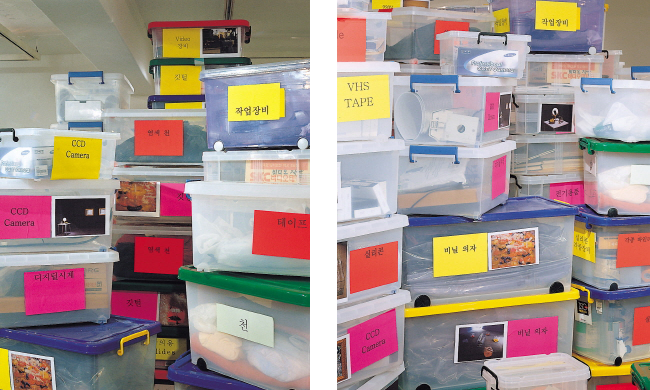 The Foundation and Subsistence of Artwork

Where does the foundation of artwork come from? Many scholars have sought for an answer, but we have yet to find any conclusion neither as a physical existence nor as an aesthetical perception. Instead, artwork became incorporated into a domain of philosophy, which created a critical mislay of an authentic nature of artworks derived from artist’s own perspective. The work <Warehouse>of this exhibition reflects the artist’s struggle over the foundation and subsistence of artwork.
The fragments of artworks accumulate in a nook of warehouse as a form of incomplete objects. After de-installation from galleries, artworks go back to boxes as a singular cord, antenna, silicone, and a videotape, losing their original shapes and meanings.
They now become a totally different existence from what they are in exhibition space and ended up losing artistic context and its symbolic dignity.

<Warehouse> is a sort of requiem for all the artworks that are no longer in artistic milieu. By exhibiting artwork made up of the fragments freed from an artistic context or a form, the artist attempts to revoke conservative philosophers’ premise about artwork that it should be impeccable and eternal.
Meanwhile, the work <Art Works Vending Machine> introduces a new distribution system of artworks. With this machine, artworks no longer need to wait for their audience. Instead, artworks burn themselves into a CD-ROM and sold through a vending machine. If a conceptual significance imposed on artworks can be unveiled, sooner or later we might be able to meet artworks sold in one of those vending machines. 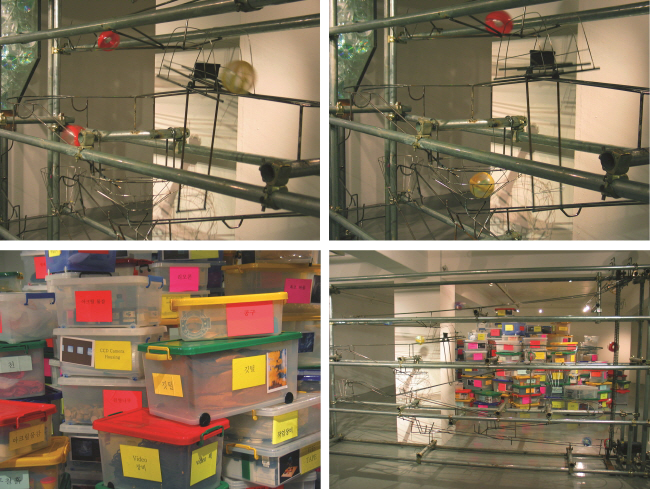